Lois Lenski was a renowned author and illustrator of children’s and young adult literature. Born in 1893, in Springfield, Ohio, Lois was a voracious reader from a young age, a passion that never left her. During her college studies at Ohio State University, where she trained to be a teacher, she took as many art courses as she could make time for and was the art editor for the university yearbook. Upon graduating, instead of teaching, Lois became an art student in New York, in preparation for what she hoped would be a career in fine art. There she met Arthur Covey, a painter and muralist, whom she married in 1921.

Sketching and painting was Lois’s passion in the early 1920’s, even as she helped Arthur raise his children from his first marriage, Margaret and Laird. While exhibiting and sometimes selling her paintings, she also found work as an illustrator of children’s books by a variety of authors. Encouraged by a publisher of some of those books, she wrote and illustrated two of her own; Skipping Village (1927), and A Little Girl of 1900 (1928), both of which were based on her childhood experiences near the turn of the century in a small Ohio town. Her career as an author was launched, and that of artist was relegated to her book illustrations. In 1929 her son, Stephen, was born, and the family moved to Harwinton, Connecticut.

In the 1930’s and early 1940’s Lois created several books in two different genres; picture books for pre-readers and early readers, and fictionalized historical books aimed at young adults that told of children’s lives in the 18th and 19th centuries. The picture books include the Mr. Small series, inspired by play-time conversations with her son, Stephen, in which the character Mr. Small undertook various activities (driving a car or sailing a boat) or vocations (airplane pilot, train engineer, farmer, policeman, and several others). In each Lois made sure that her facts were true and that the illustrations were the primary means of conveying the message. They were well-received, and some are enjoying a revival. Of the historical works, her novel Indian Captive (1941) is the most famous, receiving a Newbery Honor award in 1942 and remaining in print today. 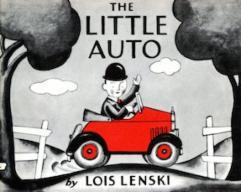 Cover Illustration from "The Little Auto," 1934

In the 1940’s Lois’s health issues required that she spend time in warmer climes. Her winter in Louisiana in 1941-2 provided her with the experiences that prompted the books for which she is most famous, the ones she called her Regionals. On Saturdays she traveled to the town of Lafitte in order to sketch and paint. There children would gather to see what she was doing. These interactions became an opportunity to learn of how the children lived, and to gather their stories. The result was Bayou Suzette (1943), in which the stories she gathered from children and their parents were woven into a fictionalized narrative and sequence. A similar approach among the rural poor of central Florida gave birth to Strawberry Girl (1945), for which Lois won the Newbery award in 1946. 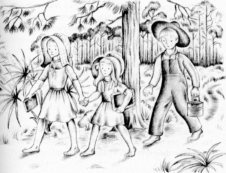 Over the next two decades thirteen more regionals followed, and in each young adult readers were introduced to unique lives and lifestyles of children from across America, each one crafted from stories she heard from children and adults among whom she lived for several weeks.

"My own experience in getting stories from people who have lived them has been so rich that I have felt a strong desire to pass them on to others. It is my hope that young people, reading my regional books, will share the life of these people as I shared it, and living it vicariously, through the means of a vivid, dramatic, authentic, real-life story, will learn something of tolerance toward people different from themselves."

Another set of stories, the Roundabout Series, were shorter novelettes or collections of short stories, aimed at 4th and 5th grade readers. 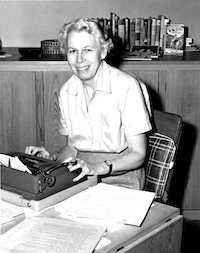 Lois in her writing studio in Tarpon Springs, FL,
circa 1965

Lois also penned and illustrated two other early reader picture book series; the Davy books, showing everyday activities and adventures of a young boy, based on Lois’s grandson David Chisholm, and the Debbie books, based on her granddaughter Jeanine. By the time of her death in 1974, Lois wrote and illustrated well over one hundred books for children of various ages.

The time Lois spent with the people that shaped the narratives of her regional novels, and the correspondence shared with literally hundreds of children, teachers, and librarians across the nation, continued to strengthen her belief in the importance of tolerance and understanding.

"We need to know our country better. We need to know not only our own region,where our roots are firmly put down, but other regions where people different from ourselves—people of different races, faiths, cultures and backgrounds…..When we know them, understand how they live and why, we will think of them as 'people'—human beings like ourselves."

In 1967 Lois established the Lois Lenski Covey Foundation, with the goals of giving back to children, who gave her so much throughout her life and career. The directors of the Foundation strive to assist organizations in their efforts to advance literacy and foster a love of reading among underserved and at-risk children and youth.

Several of Lois Lenski's works are available in print, e-book, or audio book form. See the following websites for details (the green text is a link to the websites):
Harper Collins Publishers -- Strawberry Girl and Indian Captive